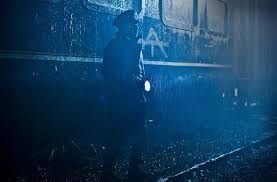 Howl (2015), from director Paul Hyett (2005’s The Descent, 2008’s Doomsday), is at its best in the first half. This section promises a moody, circa 1930’s- 1960’s Hammer Films Productions style opus. Hyett successfully utilizes this early portion to soak his frames in atmosphere to nerve-tingling effect. Likewise, sequences such as the opening shot of the full-moon hovering in the night sky, a trademark in depictions of this ilk, is striking and beautifully composed. Adam Biddle’s dark, brooding and hauntingly illustrious cinematography is perfectly suited for the undertaking. It complements the allure of such instances splendidly. These elements, especially the gradual pace of its set-up, suggest a sophisticated, subtle genre offering. Such is disregarded when this silver screen misfire descends into stock terror conventions midway into its second act. This is carried out until the concluding credits begin their wearied scroll. What is worse is that this occurs without a bit of the careful touch that came before it.

The narrative of this unrated, Starchild Pictures released horror offering concerns a ticket-collecting young man named Joe (Ed Speelers in a well-honed performance). Going about his job on the last train to London, worry sets in as the vehicle stops unexpectedly. The driver (Sean Pertwee in a solid representation) comes out to investigate. He is never seen again. Soon the answer to what may have come of him arrives in the form of a pack of ravenous lycanthropes. They are ready to tear the passengers apart. The picture than becomes a predictable battle for survival, complete with the usual components of a raging storm and all communications cut-off, between the humans and the bloodthirsty entities that slowly encompass them.

Such a plot, in itself, all too familiar. Still, there was potential to go somewhere new and have fun with the material. Alas, this only surfaces intermittently. This can be mainly attributed to the straightforward, and serviceably written, Mark Huckerby and Nick Ostler penned screenplay. It turns its emphasis on modern tropes after establishing itself in the classic model. This is another glaring problem of the last forty-five minutes. Instead of dread constructed through pieces the imagination puts together, we are amended excessive gore and other variations of cheap shock. Moreover, increasingly unlikable, and routinely issued, characterizations replace this stalwart attribute. Not only does the story itself suffer, but so does the dialogue. 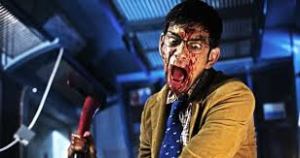 Huckerby and Ostler resort to the usual hurried shtick in this category. The on-screen personages spout exposition to strangers in a completely faux and rushed manner. What is even more ridiculous is that this is instituted while chaos reigns around them. Such makes the product all the more underwhelming. It seems like a cop-out. This is especially true after the visually stunning splendor of what came before it.

Hyett goes out of his way to promise us something much grander than we actually receive. Though it maintains moments of ebbing interest throughout, the quality is noticeably diminished. The commonplace motions of the chronicle’s arc, evident throughout, becomes all the more visible as well. It all leads to a serviceably rendered, and sadly predictable, finale.

The claustrophobia of its interior setting is also wisely used to build maximum suspenseful impact. Yet, one of the wisest moves Hyett incorporates here is the antiquated trick of leaving the savage protagonists out of the frame for most of the runtime. Instead, we smartly view small glimpses of them, much as director Ridley Scott did in Alien (1979), as they lurk in the shadows and pick off one person after the next. The creatures aren’t shown in full until fifty-six minutes into its eighty-nine minute duration. Here, Hyett also proves the old adage that a monster is usually more effective when left in the shadows. When one of these brutes are shown completely the result is vastly more disappointing than terrifying. It is another of the many signs in the later phases that the exertion is quickly derailing to a more mediocre destination.

Despite this, the performances are sturdy all around. Elliott Cowen as Adrian, Holly Weston as Ellen and Shauna MacDonald as Kate are especially terrific. Paul E. Francis’ music is well-suited and tense. Agnieska Ligget’s editing is sharp. Raquel Azevedo adds elegance to the composition with her costume design. The make-up, art and sound department deliver incredible work. But, the special and visual effects, a contribution from twenty-six people collectively, are lacking. It’s another reason why the movie should’ve stayed on its original course.

Still, Howl is fair entertainment. It’s certainly not the re-invention of its sub-genre. As a matter of fact, there is nothing to these proceedings we haven’t seen before. The sum of the labor cowers beneath the likes of features like John Landis’ An American Werewolf in London (1981), Joe Dante’s The Howling (1981) and the greatest entry in this field: George Waggner’s The Wolf Man (1941). Yet, the way it stages itself and recalls its timeless counterparts is certainly admirable. But, the individuals we follow, the heart of any account, are forgotten along the way. There is nothing distinguishing about anyone we meet on screen. This is with the exception of Joe. Thus, when the fiends start attacking we have no one to root for. Because of this any potential intensity is deflated. Instead, we watch the effort from a place of indifference and distance. Of all the crimes this ultimately average affair incorporates this is the most unforgiveable. 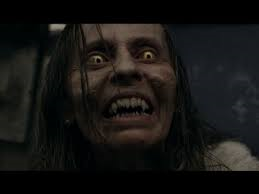