“Queen’s Mile” (2016), the debut short from actor turned writer-director Martin Delaney, is as much a testament to the abounding beauty of simplicity within a film narrative as it is a meditation on love and loss. The work is also a stunning showcase of the countless layers of depth that can be attached to an otherwise straightforward story. This is when both dialogue and exposition, all of which are credibly designed and delivered in Delaney’s labor, are kept to a minimum. In the place of such faux ‘necessities’ of cinema as those stated above, we learn as we witness. Such occurs as viewers silently follow our visibly depressed protagonist, known here as The Girl (in an incredibly wrought depiction by Emerald O’ Hanrahan that is simultaneously passionate and mournful). This is as she retreads the once joyous and now bittersweet steps, both literally and symbolically, of a relationship abruptly brought to a fatal halt. This transpires in a tourist destination along London, England’s Southbank. It is an area regarded as The Queen’s Walk. Delaney takes full advantage of the organic splendor of the various locations found within this promenade. This action only amplifies the breathtaking essence of The Girl’s surroundings immeasurably.

The nine minute and twenty-seven second construction, released through Mini Productions and budgeted at approximately 5,000 pounds, instantaneously sweeps spectators up into a varying sea of emotion. These are the sentiments brimming within our wounded heroine. Such comes to fruition through Delaney’s uncluttered, classically striking behind the lens style. This is also true of his smartly honed, focused and naturally gifted scripting sense. Cinematographer Tom Cullingham, who arrives later on in a terrifically rendered secondary role as one of several shutterbugs The Girl comes across, compliments the many triumphant and brave risks Delaney conjures. This is by injecting a veneer into the project. It is one which is as consistently gorgeous and effortlessly involving as Delaney’s aesthetic approach. Yet, Delaney lets the poignant, ambient soundtrack articulate much of what The Girl is enduring internally. It is a certified risk which pays off handsomely. “Forest Fires”, written by Lauren Aqulina, and “The World At Large”, penned and composed by Dann Gallucci, Eric Judy and Isaac Brock, instill continued intimacy into the presentation. Their sonic contributions greatly enhance the affectionate pulse. Such elevates all we encounter. Consequentially, the overall results are all the more urgent, relatable and immersive.

Delaney’s endeavor opens with quiet intrigue. In a brilliantly done bit, which immediately establishes the achingly wistful tone of the exertion, The Girl wanders to a pier. It is one overlooking the nearby Thames River. Gradually, she looks over the edge. A grimace of obvious regret and pain strikes her face. Finding a man (in a skillful enactment by Rez Kempton that assists mightily in projecting the sheer realism at hand) close to her, she has the individual take her picture. In the next sequence, we see her applying the recently recorded image to a worn scrapbook. The bulk of the affair moves in this captivatingly cryptic manner. This is as The Girl encounters crowds of people. There is even a merry group of musicians and dancers early on. Such gives way to restaurants and cafes. All of which are, at least as spied through the unique knack for both character and perspective Delaney elucidates throughout, teaming with apparently upbeat souls. Yet, our lead always seems distant and lonely. She remains vulnerable. This is despite the livelihood of those around her. We can’t help but wonder why. Such an inquiry increases our fascination. This is as the well-paced runtime guides us to the heart-wrenching answer. 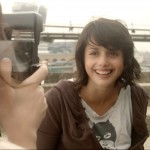 Such begins to unveil around the five minute mark. It is in another of the many telltale signs of happiness The Girl sees as an agonizing symbol of bygone days. This is in a bouquet of flowers. It is an elegiac sight which propels the viewers to an extended flashback arrangement. Such awards an appropriately ardent climax. It is one which is as haunting as it is hopelessly romantic. Moreover, this segment, like the entirety of the presentation, is technically spectacular.

This previously mentioned quality arrives via a brief, but integral, demonstration from Amrita Acharia. She alluringly portrays the object of The Girl’s affections, Ania. Watchers are also offered a display of smooth, seamless and proficient editing from co-producer Simon Pearce. Nicholas Collins issues an exceptional involvement in the sound department. Veemsen Lama and Cullingham heighten the immaculate nature of these proceedings. This is with their spellbinding camera operation.

Such creates a resonant masterpiece. This is most readily perceptible when pondering all of the varied levels of the account. Delaney has attempted to reflect on often confusing impressions. These are the imprints which emerge long after bidding farewell to someone you adore. It is an impetus, a connection to onlookers that Delaney utilizes to make us care for The Girl and her grief-stricken quest all the more. This he victoriously administers throughout the undertaking. Such ensues without a mere instance of the heavy-handed melodrama such a plot could’ve easily descended into. What is even more worthy of acclaim is that Delaney doesn’t rely solely on this aforesaid extension to the events on-screen for sheer impact. The gentle reserve within this photoplay succeeds immensely on its own fundamental merits. The composition also appears wonderfully old-fashioned. Such is especially accurate when pondering its general structure and evident lack of contemporary cynicism. The latter is all the more of a feat when considering its somber subject matter. In turn, Delaney has provided a searing exhibition of sincerity and aptitude. “Queen’s Mile” is a guaranteed weeper.

*The images included herein are the copyright of Protean Pictures. 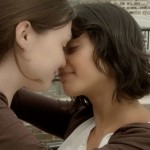 “Numb” (2016), the third short film from writer-director Penelope Lawson, is an intriguing study in temperament. It is one which is much in line with Steve McQueen’s controversial, NC-17 rated tour de force, Shame (2011). The ten minute production, budgeted at $10,000, follows Astrid (in a harrowing portrayal by co-producer Rebecca Martos). She is an emotionally distant, yet unusually relatable, protagonist. Throughout the course of Lawson’s engaging assembly, this factor is backed up by the several sexual relationships she engages in. These are all with the random men she encounters. Yet, a genuine connection between any of them is obviously lacking. As a matter of fact, much of the piece seems to be a reflection on the individuals she meets. There seems to be a new entity arriving with each scene. Often these people reach out to her anyways. Yet, the title adjective of the narrative remains true for our heroine. Their calls for assistance slips away silent, unnoticed. This might even be a deliberate ignorance on Astrid’s behalf.

Such heightens the shroud of mystery hovering over her personality. We find ourselves caught up in the proceedings of Lawson’s well-paced, intelligently penned affair. Such transpires to the point that we always ponder the incredible insights Astrid might unveil. This is if she were to actually confront her feelings instead of purposefully avoiding them. This is to both her spectators and about herself. Lawson’s exercise meditates on this fine line. It is one most folks find themselves forced to walk. Such accrues to spectacular effect. It is this impetus, along with the catastrophic episode which made Astrid so hollow within (which is wisely kept a mystery until the seven and a half minute mark), that helps make Lawson’s work so fascinating.

When we first meet Astrid, she is sitting in an exotically designed, presumably high-end, restaurant. This sequence is duplicated in part later on to great magnitude. This is a striking way to immediately draw the audience into Astrid’s world. It is also instrumental in conveying the repetition of similar events that is her days. This is a recurrence that is not only powerful, especially when it is recalled, but also suggests that Astrid’s existence is in a stationary state. Such is another way of relating to viewers her expressive roadblocks. Continuing this example is another early segment. It finds Astrid passively attending an Alcoholics Anonymous meeting. The bit features one of the attendees mentioning how he admired how the intoxicants which brought him to the gathering made him “numb”. It is this word, and the manner it is presented, which seem to be speaking as much for the young man as it is for Astrid.

Lawson’s brilliant screenplay wisely leaves out the specifics of how Astrid came to be at such a place. Yet, the dialogue, which is as authentic in this instance as it is throughout, certainly allows the mind to put the enigmatic pieces together themselves. It is this inscrutable nature, which also holds a mirror to the personality of Astrid, which forces the watcher to interact. In turn, we become all the more involved in this stirring drama. Punctuating this actuality is an indeterminate finale. What it suggests is haunting. The manner in which it is projected, with the results presumable prefaced through a single line of speech, makes it all the more so.

All of this is further complimented by the subtle, realistic atmosphere Lawson evokes. This comes from both her natural, accomplished behind the lens style. The same can be said for her storytelling capacity. There is never a moment, a situation or action that seems artificial. The existence of these items is never simply, as it would be in lesser hands, to move the plot forward. Such is indefinitely worthy of attention and respect. These are just a few of the many signposts of Lawson’s gargantuan talent planted along the way.

There is tangible beauty, amid the emphasis on the secrets many keep, here. Such is made all the more visible by Matthew Mendelson’s dark, moody, somber and illustrious cinematography. His sharp editing fares just as well. Jamie Sonfroniou’s art direction and wardrobe are exceptional. Darlene Spennato’s make-up is gorgeous. Silvio Canihuante Fernandez provides crisp, proficient sound. The camera department, composed of a personnel of eight, is masterful. “I Can Change” by LCD Soundsystem, “Five Seconds” by Twin Shadow and “Lamb’s Canyon” by Evan Louison and Mendelson provide a riveting sonic ambiance. But, the heart of the success of the labor, aside from Lawson’s contributions, are the stellar performances. Jason De Beer as Matt, Daniel Deutsch as Mark and Nicolas DiPierro as Mike are terrific. They reflect the commonplace mechanisms of the tone exceptionally. Melissa Johnson as Ellen, Travis Mitchell as James and Olivia Sharpe as Maddie grandly enhance the overall quality of the depictions.

Such creates a well-rounded, technically solid slice of life. Lawson avoids the theatrical techniques that could’ve easily been applied to a chronicle such as this at every turn to falsely increase resonance. The result is a fabrication that is all the more rich, varied and bold because of such a decision. A meticulous eye for forthright characterization, all cleverly introduced with nary a wit of exposition, makes Lawson’s abundant aptitude all the more visible. This is a peerless representation of art imitating our existence. With “Numb”, Lawson has crafted a cerebral visual tome; a surefire winner.

The official Facebook page for the project can be found here.