Writer-director Keir Burrows’ Anti Matter (2016) is smart, credible and entertaining science based fiction. It is the type of tale those of us with a lifelong admiration for such literary masters as Ray Bradbury, Michael Chrichton and Jules Verne always find an absolute joy to sit through. This is because Burrows’ meticulously paced and structured, 106-minute project feels as if it could’ve been the brainchild of any one of these prior stated legends. This is true of both its bold, theoretical themes and its captivating execution. Such a comparison also derives from Burrows’ existence-mirroring and suitably developed characterizations. There is also a related respect Burrows has for the intelligence of his audience. This is a courtesy of Burrows’ intriguing plot. Continued thanks in this arena is also due to his sharp, layered screenplay. It is full of insightful dialogue. Praise is also mandated to his hypnotic guidance of the exercise.

Burrows’ presentation concerns Ana Carter (in a gripping portrayal by Yaiza Figueroa). She is a PhD student at Oxford University. As the saga unfolds, she finds memories impossible to erect. This is after a procedure to build and go through a wormhole. After a well-done setup, the last two acts of this Uncork’d Entertainment distribution release showcase Ana’s frantic cracks at understanding what transpired while conducting the experiment. Adding to the sudden stress is a lingering impression that something terrible is slowly surrounding her. Such attributes institute a ticking clock motif to the endeavor. This makes the underlying suspense evermore palpable.

Previously titled Worm, Burrows’ production is initially a bit conventional. This is in its incorporation of Ana’s inexplicable amnesia. Though Burrows works other traditional elements into the narrative afterwards, this criticism quickly diminishes. This is as Burrows goes beyond the standard employment of this oft-exploited trope. In so doing, Burrows immerses bystanders in Ana’s newfound fascination with dreams. This interest also extends to making sense of the noticeably off world around her. Best of all, Burrows provides a rousing finale. It is one that deserts the multi-million-dollar mayhem so commonly equated with far too many climaxes in this chronicle-oriented genus. This is to bring us a culmination that is harrowing, not because of explosions or endless gunfire, but because of the ideas it offers. Not to mention, the resolution beautifully ties up the details of Ana’s circumstance. The cause of which is as riveting as it is illuminating.

From a cast and crew standpoint, the feature is just as triumphant. Edwin Sykes’ regularly low-key music is terrific. The cinematography from Gerry Vasbenter is gritty and proficient. Such is perfectly fitting to Burrows’ brilliantly executed, same said tone. The editing by Rhys Barter is seamless. Correspondingly, the make-up, sound and costume design are top-notch. The formerly undeclared representations are also strong. For example, Phillipa Carson is excellent as Liv. Tom-Barber Duffy as Nate and Noah Maxwell Clarke as Stovington are just as successful.

Though not as deceptively intricate or emotionally resonant as Denis Villeneuve’s recent film, Arrival (2016), Burrows has crafted a movie that is just as unforgettable. The subject matter alone draws alignments to Bradbury’s short story, “A Sound of Thunder” (1952), and Chrichton’s novel, Timeline (1999). This primarily stems from its application of connections in space-time. Likewise, the ability to get through them into other regions. Yet, Burrows’ exertion abandons the exploration of what may hypothetically be on the other side of such a construction. This is to focus in on how such travel may immediately affect the universe we call our own. It is an engaging notion; one that is marvelously put together. Simultaneously, the manner that the opening and conclusion play off one another is just as smirk-inducing. There are also some felicitous topics, such as vivisection, Burrows instills into the episode. This comes in the form of the peer protests that surround Ana. These tidbits also lend perpetual authenticity to her landscape. Such relatively quiet touches also further the depth of the venture immeasurably. The result of these qualities is the best film of its ilk I’ve seen this year.

Anti Matter will be available in select theaters and on Video on Demand September 8th. 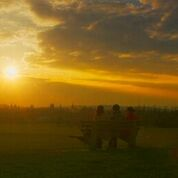