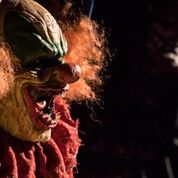 Director and co-producer Christopher Douglas-Olen Ray’s Circus Kane (2017) is a grisly, claustrophobic and often imaginative fun house of cinematic horrors. Written by James Cullen Bressack and Zack Ward (from a story from Sean Sellars), the eighty-eight-minute feature calls to mind William Castle’s masterpiece House on Haunted Hill (1959) and James Wan’s groundbreaking Saw (2004). There are also echoes of Tod Browning’s controversial motion picture, Freaks (1932), Herk Harvey’s brilliant Carnival of Souls (1962) and Stephen Chiodo’s cult classic, Killer Klowns from Outer Space (1988). These latter comparisons derive from the big top related setting shared in these previously addressed fictions. It also extends to the visceral effectiveness of these exercises. This relationship can also be viewed in their communal ability to unnerve via incredible imagery.

The former parallels can be found in the plot itself. Such concerns the secluded Balthazar Kane (in a wickedly good performance from Tim Abell) sending a group of social media stars an invitation via text. This offer states that any individual who can make it through his title walk-through residence of scares will collect $250,000. With some participants thinking this is merely a publicity gimmick, Ray’s central figures quickly accept. Once inside, the alignment to Castle and Wan’s work comes to light. This is as they find out that the real reward for the lethal terrors they endure is coming out of such a psychologically grueling and dreadful experience with their lives intact. 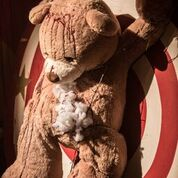 Bressack and Ward’s perfectly paced scripting of this intriguing tale is routinely structured. Subsequently, the characters are archetypical. Yet, they are sufficiently developed. They are given continued dimension. This is by the charismatic and stellar enactments from those who embody these on-screen personalities. For instance, Jonathan Lipnicki is tremendous as Scott. Mark Christopher Lawrence as Billy, Sinjin Rosa as Jake and Nicole Fox as Carrie are all top-notch. Even the antagonists, such as Bill Voorhees’ memorable representation of The Clown, are terrific.

Likewise, the notions Kane utilizes in his sinister game with our protagonists occasionally resonates familiarity. But, the sequences involving these bits are marvelously fashioned. In turn, such criticisms do little to sway the high-engagement factor such configurations hold over audiences. What is just as amusing is the constant references to classic media which populate the endeavor. This is especially true of the first half of this Uncork’d Entertainment distribution release. 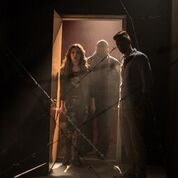 Correspondingly, Ray’s guidance of the project is masterful. It contains just the right amount of visual style and spine-tingling atmosphere. Such makes the variety of macabre sights and malevolent snares Kane dispenses on Ray’s protagonists evermore absorbing. Such an attribute is also assisted by Alexander Yellen’s eye-popping cinematography. Adam Oliver’s ominous music and Joseph J. Lawson’s special effects are spectacular. James Kondelik’s editing is sharp. The contribution from the sound and make-up squad fares just as triumphantly. Such details punctuate these abovementioned episodes of trepidation, as well as the excursion itself, in a manner that makes the exertion a consistently dark delight.

This foreboding allure is palpable in the arresting commencing credits arrangement. It is just as noteworthy in the expository passages located immediately afterward. These erect the foundation of the narrative. From herein, Ray crafts a gripping and haunting exercise. It is one that is augmented by its welcome attempt to understand the inner-mechanisms of the nefarious Kane. Evidence of this can be unveiled in an intimate monologue from the man himself. Such occurs in the final twenty minutes. This leads to both a tense climax and a smirk-inducing finale. The result is a B-movie gem. It is also further proof of the prowess of Ray and the collaborative abilities of authors Bressack and Ward.

Circus Kane will be available on Video on Demand September 8th, 2017.