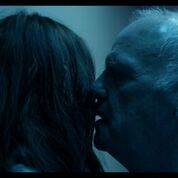 Bethany (2017), a full-length feature from the prolific twenty-four-year old writer-director James Cullen Bressack, is a surreal nightmare; an unnervingly successful contortionist’s act that ranges between past and present traumas. At a brisk ninety-minutes in length, Bressack luminously crosses these stages in time. Such accrues with a seamless mixture of classic gothic horror and modern shock. What is just as striking is how stalwartly Bressack’s latest endeavor aligns itself to the supernatural subtleties of author Shirley Jackson’s The Haunting of Hill House (1959). Such transpires in its earlier stretches. There are even bits which splendidly capture what can be deemed a modern sense of Jackson’s storytelling refinement. Once the presentation nears the second act, the photoplay becomes a nail-biting chain of ghastly, genre-related set-pieces. Each one is more creative and aggressive than the one prior.

Such commences with a distressing, aptly composed sequence at twenty-two minutes in. This segment oversees our troubled heroine, Claire (in a wrenching and ever-believable embodiment by Stefanie Estes) grimacing. This is as she unveils an unexpected crunch in her cereal. As she looks down, she sees roaches climbing out of the bowl. These events only spiral more wildly out of control. Such erupts as Claire’s grip on reality becomes more questionable. Until the comparatively tepid final fifteen minutes, Bressack brings forth a vivid extravaganza of these ethereal proceedings. The majority are made increasingly more delightful. This is in the method in which they constantly called to mind the fictions of Clive Barker. There are also many incidents which made me reflect upon the imaginative celluloid of Wes Craven. Primarily, Nightmare on Elm Street (1984) and New Nightmare (1994). Tobe Hooper’s masterpiece, Poltergeist (1982), was also a frequent echo found within the effort. Moreover, there is a memorable and jarring episode near the half hour mark. It involves Claire pulling on her cheeks. Such made me think a section in Brian Gibson’s Poltergeist II: The Other Side (1986). This is where the braces of Robbie Freeling (Oliver Robins) took on a life of their own. This only augmented the sheer joy the cinephile in me uncovered in the project. 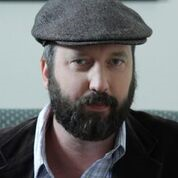 Bressack is clearly inspired. Still, every shot and every scare emerges in a manner that makes it increasingly easier to gaze through Claire’s eyes. When the deftly executed plot begins to unfold, Claire finds herself moving back to her youthful abode. This is with her husband, Aaron (co-scripter Zack Ward in a layered and commanding depiction), in tow. Almost immediately, Claire hears the title personality, an entity that was once thought to be “an invisible friend”, calling her. Making matters worse are the visions of her mother, Susan (in a masterful depiction from Shannen Doherty), which gradually plague the woman. Haunted by flashbacks, which also operate as a gripping form of delivering exposition, the circumstances around Claire become ever more violent and bizarre. With Aaron and Claire’s psychologist, Dr. Brown (in a riveting enactment from comedian Tom Green), desperately seeking to disclose what is ailing Claire, she simultaneously questions her sanity and reality. This is as once buried affairs make their way back into her existence.

Despite this firm, but familiar, foundation, the characters and their motivations are stock. On a similar note, most of the dialogue which dominate Bressack and Ward’s otherwise astounding screenplay are archetypical. Yet, the narrative moves at such a breakneck pace that such demerits seem petty in comparison. Best of all, Bressack and Ward never once lose their fixation on the richly developed personas. The same can be said for the psychologically torturous atmosphere of terror the offering evokes. Such is induced in its opening: A quietly chilling two-minute long arrangement. This portion involves Young Claire (in a turn by Anna Harr that is dazzling), a stuffed bear and an unseen presence by the name of Bethany(which Harr portrays just as unflinchingly as the previously addressed portrayal). After this attention-garnering jolt, Bressack’s endeavor only gains a riveting, imagery-laden momentum. This is as it pushes forward. In so doing, Bressack and Ward offer an all-inclusive catalogue of tropes and uniquely apprehensive notions. Such is increasingly entertaining. This is without ever feeling excessive. A variety of the twists, such as one unveiled circa the halfway point, fall into the category of the tried and true. Still, it does little to damage the evocative, technically impressive nature of this Uncork’d Entertainment distribution. Bressack’s bravura guidance of the tale, as well as the concluding credits, carry this feeling to the last frame of the picture. 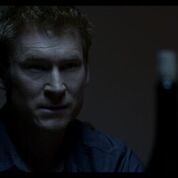 Continuing to help matters is the claustrophobic and skin-crawlingly resonant music, a medley of pianos and violins, from Alex Csillag. Likewise, John DeFazio orchestrates cinematography that is brooding gorgeous, suitable and consistently terrific. The editing from Bobby K. Richardson is sharp and seamless. Tiffany K. Wong’s production design, Ryan Henneman’s art direction and Alycia Belle’s costume creation is similarly exceptional. Furthermore, the make-up, sound and camera and electrical squad are captivating. Another marvel is the certainly eye-popping and credible work of the visual and special effects crew. Correspondingly, Leon Russom as Doctor Merman, Kevin Porter as Nurse Foster and Keith Jardine as Harrison reiterate the overall strength of the chronicle. This is with their high-quality performances. Felissa Rose as Janice the Realtor, Kristy Hill as Maternity Nurse and John Murray as Mr. Hodges are also phenomenal. Tiana Whitley as Young Susan, Ellen Gerstell as Marcy and Timmy Pistol as Carl only expand the transcendent edge of the cast.

The result of these herculean components is a configuration that redefines the term “white-knuckle”. Bressack’s item is both sophisticated and grueling. This ultimately exhibits the deft balance of the antiquated and the contemporary approaches to trepidation conjured in this undertaking. But, what is most remarkable is that Bressack, who also plays a hospital visitor, makes us care for Claire. This is also true of those close to her. Such is of the utmost necessity. This is for bystanders to be as absorbed and enthralled as possible as Claire undergoes hell itself. Consequently, the flick rises as resoundingly as a drama as it does a venture into the brooding heart of apprehension. Because of this, Bressack has crafted an exuberant display of talent; a surefire winner. Fellow aficionados of fright will want to check this highly-recommended tour de force out for themselves. You can do so when Bethany, a Brilliant Screen Studios and Grit Film Works fabrication, arrives in theaters April 7th, 2017. 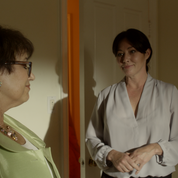