Near the mid-way point of writer-director Steve Lawson’s unapologetically entertaining, science-fiction/ horror undertaking, KillerSaurus (2015), Jed Bailey (in an amusing and ruggedly charismatic portrayal by Kenton Hall) dryly quips: “What do they got in there, King Kong?” As is well known, the quote originates from the iconic Chaos Theory-minded mathematician, Dr. Ian Malcolm. Such an immortal bit was previously delivered through Jeff Goldblum’s brilliant enactment of the eccentric personality. This was in Steven Spielberg’s timeless rendition of Michael Chrichton’s best-selling masterpiece, Jurassic Park (1993). Such a line, though obviously recycled, brought me an ever-broadening smile. This is because I am one of the legion who continues to look at Spielberg’s feature, and dinosaurs in general, as enduring personal favorites. To me, they remain an unbroken link to the merriment and wonder of childhood. This quality alone propelled my enthusiasm for Lawson’s already striking photoplay. Yet, the relentlessly smoky, dark and playfully foreboding tone, refreshingly etched characterizations and the sparse, but mostly striking, uncredited effects are far more reminiscent of an entirely different moviemaking endeavor. This is legendary craftsman Roger Corman’s enchanting camp classic, an adaptation of a 1984 novel by Harry Adam Knight (whose real name is John Raymond Brosnan), Carnosaur (1993).

Regardless of the way it attaches itself to these past nostalgias, lofty ambition and imaginative inklings are clearly visible. This further punctuates the highly charming, made for the drive-in sensibility that pulsates throughout. Likewise, much of the banter, especially when describing the creation of a Tyrannosaurus Rex with the aid of a 3-D printer, is fascinating. The specifics which accompany this particular invention, spread throughout the labor largely via Professor Peterson (a watchable enactment by Steven Dolton which captures all the attributes of the modernized ‘mad scientist’ persona splendidly), are equally gripping. They triumph at filling in the backstory gaps in an intriguing fashion. It is done in a manner which, simultaneously, isn’t extraneous. Also, it doesn’t bog down the continually smooth pace. 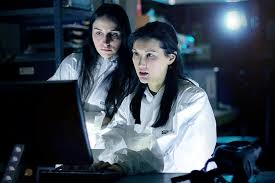 Additionally, these notions, especially the formation of the carnivore itself, are also clever. Much in the same vein, they are intellectually stimulating theories to ponder. This comes off as highly comparable to Jurassic Park in another arena. This is to that of billionaire John Hammond’s own personal modus of bringing to life these long extinct beasts. The use of frogs is existent in Lawson, Chrichton and Spielberg’s fabrications. Still, the number never fully relies on this parallel to enthrall audiences. Lawson has gleefully utilized these conversant elements to build an alternately meditative and engaging opus. It is one which is distinctly its own entity. Such a sensation broadens in a certain moment where information about the final vision concerning  Professor Peterson’s menace is unveiled. A late third act issued fact about this creature brings this impression especially forward. This data mirrors the terrific fourth installment in the Jurassic Park franchise, Jurassic World (2015). Such a recollection arises when we find out that the resurrected relic is being planned to be used as a war weapon. This is courtesy of a mysterious governmental organization. We eventually learn that they are funding Professor Peterson’s project.

Lawson commences the narrative of his sixth cinematic venture with a tense, attention-garnering and technically impressive on all avenues ten-minute opener. During this sequence, tragedy befalls Professor Peterson’s secret research facility. This is when the above-mentioned fossil reptile slaughters many of the members of the area of “The Center”. After a skillfully designed, and spectacularly visual acknowledgements scene, we move forward in time. From this point, we uncover that our protagonist, Kayleigh Ma (in a finely wrought and multi-dimensional depiction by Helen Crevel), has been forced to sign a non-disclosure agreement. This is concerning the horrific dealings in Peterson’s building. Frustrated, she hesitantly goes back to the place of the initial bloodshed alongside blogger Bailey. Soon the two are drawn back into the life Ma was forced to not discuss. From herein, concealed intentions are exposed. Just as terribly, the vicious creature proves to be as much of a ravenous threat as beforehand. Inevitably, a fight for survival ensues. This is as both the sixty-five million year old fiend and the association that is backing Professor Peterson makes their presence increasingly known. 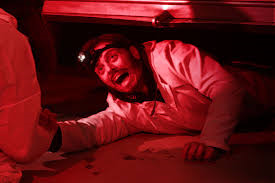 Though the plot seems fashioned from the same related sources as it winks at in both sights and dissertation, the Creativ Solutions production and Wild Eye Releasing and 88 Films distribution never seems that way. This is because Lawson has given us a late-night delight. It is one which has a balance of wit and will. This is despite its obvious financial restraints. The composition also wisely subscribes to a proven adage. This is that the act of making your audience wait to see the beast shall increase effectiveness and unease. Such an approach summons the ideology behind another Spielberg tour de force: Jaws (1975). As a matter of fact, we do not see the Tyrannosaurus Rex in full until forty-four of its seventy-four minutes have passed. Yet, the elusions to the ferocious mammal generates an ominous ambiance. It helps us anticipate the visage of the upper-Cretaceous Period giant all the more. When we finally do view the ancient terror, it only enhances the impact enormously. Such appearances are kept to a minimum. Proving these tested guidelines of similar exertions correct, this elevates the interest and investment in what is accruing on-screen. Best of all, it shapes the intensity perceived within into an ever-palpable and taunt construction.

This bareness is riveting for most of the sit-through. Such is especially true when the minimalism present is issued in relation to the limited personalities in the tale itself. It also is just as accurate in consideration of the few locations used. This makes the piece all the more claustrophobic and resourceful. Even the small scale and infrequent action segments, which are both nail-biting and inventive in their own right, carry a charm that any measure of overwrought, multi-million dollar spectacles will never know. For example, there is a late second act passage involving Bailey being locked in a room with the villainous theropod. This is a deft illustration of how impeccably these components combine in such instances. In retrospect, Lawson’s effort is a masterclass in this avenue. This is until this strength of the slight is interjected to concoct an abrupt, and relatively, limp finale. Such an incident occurs at sixty-eight minutes in. It, rather cleverly in hindsight, intends to elude to what happens solely through a single item of speech. This is provided as a replacement to showcasing these motions. 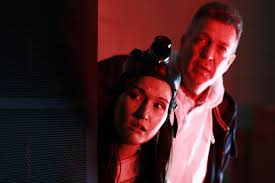 Still, the arrangement remains stalwart as a whole. This is shaped tremendously by the assistance of the likable, high-caliber turns from everyone involved. Julian Boote as Andrews, Adam Collins as Sergeant, Vicki Glover as Amy and Marc Hamill as Laser Technician all offer credible, proficient representations. They bring life to individuals that could’ve easily become genre stock. Lawson’s crisp, clean and immersive cinematography, editing, camera work and sound contribution are spectacular. His direction and writing are equally sharp and stylish. Furthermore, Alex Young’s original score is thrilling. It perfectly complements the material. Kevin McLeod’s end montage music fares just as well.

Though the story arc is as familiar as the twists which are found within, Lawson has delivered a superior B- gem. There is a welcome and appropriately retro feel to the the proceedings. Such an impression remains unwavering. This is even when modern touches, such as the flashes of various explosions spied in the climax, are visibly computer generated. These minor glitches are easy to forgive. It is because KillerSaurus is consistently fun. The account never gives into being too self-aware. In the tradition of the best entries of its ilk, it is somber in mood yet, doesn’t take itself too seriously. Even if the culminating result isn’t as close to Spielberg as it would like to be, there is an abundance of ingenuity and talent operating on various levels throughout. Such makes Lawson’s exertion a magnificent case of all that can be completed without fiscal excess. It is also an exhibition of what can be instituted when deprived of an overabundance of special effects and gore to substitute excellence. Of the catalogue of accomplishments Lawson derives, this is the most necessary and incredible of them all. 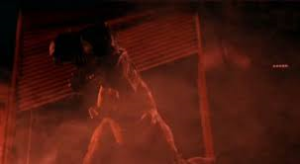