One of four short films writer-director Meg Skaff constructed in 2012, “Linda LeThorn & the Music Box” is a hypnotically erected, splendidly paced and, ultimately, rousing success. Skaff takes the tried and true horror element of a haunted music box and builds a world around it that is mesmerizing and wholly new. This is courtesy of, and made all the more engrossing by, Skaff’s witty, wry observations of the weird and commonplace intertwining. Her brilliant screenplay and impeccable eye for framing these components into entertaining, stylistic bravura makes this mixture all the more illuminating. Such items punctuate the plethora of uncanny observations at hand. All of these are produced in a manner as if the camera itself is reflecting the interpretation of our enthrallingly odd title heroine (in an impeccably realized performance by Aundrea Fares where her monotone, emotionless character expressions only heightens the effectiveness of the already potent humor).

Such a tone is established immediately in an opening montage of sorts which showcases LeThorn’s various pets. This sensation never wavers throughout the seventeen minute runtime of this dazzlingly made comedic opus of innocence and melancholy. Even the most routine of moments, such as a repeated sequence in the first half which showcases LeThorn peering at frozen food as if both ravenous and drugged in a grocery store, are put together in a manner that is both hallucinogenic and ominous. They are also darkly hilarious and captivating. All of these words are perfect for the atmosphere Skaff gives the material. It fits wonderfully. Such makes the intelligence and expertise resounding through every frame all the more intense. Yet, all of the distinctive images, and the incredibly delivered bits of Skaff’s well-penned and credible dialogue which accompanies them, conjures a wisely underplayed, yet visible, level of emotion. I related to LeThorn and the projected assessment of the landscape she inhabits more than I care to admit.

Skaff, who has a small bit as a homeless person here, tells the tale of LeThorn receiving a collection of one of a kind articles from her Aunt Lucinda (in a fantastic role of the domineering by Susan Kirby that etches her character, largely via flashbacks, remarkably well through brief glimpses). Among these is the aforementioned container of sound. It is one which happens to play songs on its own accord. Almost immediately after receiving this resplendent item, LeThorn becomes possessed by Lucinda. From herein, she learns of a debilitated love triangle involving Lucinda. She also feels the need to start a skin-picking society. This is something of an ode to one of Lucinda’s equally inexplicable traits. Such a characteristic becomes the pushing force for a large portion of the dryly riotous second half. Likewise, the account ends on an appropriate note. It is just as attention-garnering and expressive of LeThorn’s isolated domain as what opens the venture.

The rest of the cast and crew provide exceptional work. Timothy J. Cox is delightful in his depiction of the sweat-suit wearing, bespectacled individual we come to know as Purple Green. He lives in the same building as LeThorn. Simultaneously, he also appears to be named after the color of clothing he wears. Ashley Peoples as Geraldine, Brit-Chardle Sellers as Terry Kendall and Kimberly David as Traffy are all terrific. The previously stated depictions are as singularly off-beat and watchable as LeThorn herself. 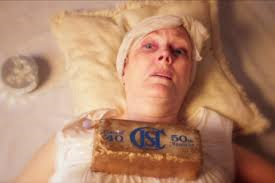 Composer Insula Dulcamara’s music echoes the nature of the fiction well. The soundtrack is melodic, uniquely beautiful, dramatic and evocative. Skaff’s cinematography is marvelous. It makes all we encounter into a consistently gorgeous visual feast. This is especially evident in the more dream-like instances. We see this in one spectacularly done early moment. Such transpires when LeThorn is viewed dancing in her apartment. This strange segment is made all the more so as a majestic glimmer of a disco ball arrives out of nowhere. Immediately, it begins spinning radiantly in the background. The direction, editing, production design, costume, wardrobe and make-up work by Skaff are just as proficient and appealing.

Skaff has proven herself an incredible talent with “Linda LeThorn & the Music Box”. There is a striking parallel to her approach here and that of a film by Wes Anderson (2001’s The Royal Tenenbaums, 2014’s The Grand Budapest Hotel) at his most sophisticated and striking. Furthermore, some of the more ethereal scenes call to mind, in their own way, the behind the camera flare of moviemaker Tim Burton (1988’s Beetlejuice, 1990’s Edward Scissorhands). Best of all, the laughs are quietly underplayed. They are never highlighted as such as many modern mainstream genre entries appear obliged to do. Each guffaw is planted in one sense or another in reality as exclusively spied by LeThorn. Such only adds to the skill and craftsmanship pulsating throughout. It all comes together to create a masterpiece; a commentary on social interactions and society itself that is biting, bold, memorable and downright hysterical. This is a must-see! 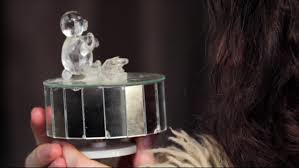