On its surface Trofiq Rzayev’s fourteen minute, 18+ rated short, “In a Time for Sleep”, is about a turbulent relationship. It is one which explodes into un-meditated violence. This is during what it meant to be a celebratory one-month anniversary dinner. Such shockingly transpires between our heroine, Leyla (an incredibly honed depiction by Goknur Danishik that is both vulnerable and aggressive in equal doses), and her ungrateful boyfriend, Arda (a terrific performance by Mehmet Faith Guven that greatly enhances the credibility on-screen). Yet, the Turkish language piece, released through Angry Student Productions, derives poetry and dramatic resonance from a set-up less competent filmmakers would use for traditional thriller conventions.

Screenwriters Guven and Rzayev also add quiet commentaries on the intervention of fate. This arises most readily from the bond Leyla finds in an unnamed woman (a strong representation by Elif Barut) she meets, and partners up with, along the way. For most brief features this would be enough. Despite this, Guven and Rzayev focus sharply on how the incident, whose action and deliberation of potential consequences take up the first half of the composition, shapes Leyla’s sense of liberation. In the wake of the bloodshed, she also unveils her true self. The emotive heft of this reveal becomes all the more poignant. Such occurs with the realization that this individual spirit was abandoned, discarded even, during her time with Arda. This is powerful material. It is made all the more potent by the meticulous care and craftsmanship at hand. Such reverberates through every frame and creative influence from the moviemakers herein.

Much like Rzayev’s terrific “Nihan: The Last Page”, which also concerned the difficult aftermath of a liaison, Guven and Rzayev find a tone that is striking and consistently mature to tell their transformative tale. It is also stunningly beautiful. This is issued immediately. It is only expanded upon as the affair unravels. Most incredibly, there is an authenticity about the situations and what comes from them. Furthermore, the characterizations and the overall veneer share this attribute splendidly. Likewise, the pace is brilliantly etched. It offers even time to contemplate every major turn in its narrative events. This is without feeling rushed. Moreover, it never betrays the believable, slice of life nature. Such is accomplished effortlessly throughout. The script is intelligent, multi-layered and awe-inspiringly fashioned. Rzayev’s directorial contribution is elegant, often understated, gentle and endlessly impressive. It, again, showcases Rzayev’s absolute mastery of the cinematic craft. All of these elements are also much in line with the previously stated endeavor. 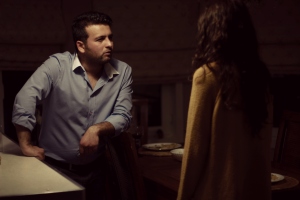 The other technical facets are just as astounding. Rzayev’s cinematography is illustrious. It fits the eloquent atmosphere of the chronicle terrifically well. The same can be said for his input to the editing of the undertaking. The original score by Gergo Elekes and songs by Serif Ahmet Ege are transcendent and touching. David Kislik’s visual effects are phenomenal. These components only further increase the plausibility Rzayev is obviously striving for. An inventively done concluding credits bit only heighten the appeal.

Rzavey has created a full-bodied masterpiece. “In a Time for Sleep” is entirely fulfilling as a gripping account. It is just as ravishing as a study of those we encounter on-screen. From Leyla’s commencing line, “You’ve destroyed everything!”, to its uniquely uplifting climax: our attention is piqued throughout. Yet, its emphasis on thoughtfulness, spied most readily in even its most miniscule of instances, is the most encapsulating component of all. What is just as astonishing is how this is all consummated in such a transitory duration. Rzayev’s latest satisfies on all aspects. For those of us who adore a moving picture which challenges and compels, as well as invigorates and leaves a lasting impression, this is mandatory viewing.