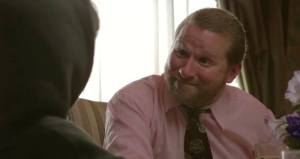 Director Lee Loechler and writer Yael Green deliver a quietly powerful statement on religious conversion with the short picture from 2013, “Choosing Sides”. Painted with several moments of genuine hilarity, mostly deriving from the aforementioned situation, the exertion defies the bitter, preachy sermon the piece could’ve easily become in less capable hands. Instead, the two frame the composition in a radiant likeability. There is a perpetual warmth throughout that walks the line between comedy and drama. Such allows the audience to pick up on its message through their own assessment of the happenstance. This is a brilliant move. Such is true in that it allows the configuration, which plays entirely as a single extended segment, to unravel naturally and believably. In turn, there is never an instant where the illusion that we are watching a scene that could have occurred over numerous dinner tables throughout the world becomes shattered. This is another fantastic element of this effort. The experience overall will be wholly unique and intimate to every one of the exertion’s patrons. Such is another wonderful turn from the filmmakers’ decision to simply show the sequence without interrupting with their own thoughts. Never do Loechler and Green add any unnecessary cues as to how they want us to feel. They are inherently confident in their vision. Such only heightens the professionalism glistening through every frame of this subtle masterwork. The result is amazing. This is pure magic.

Though the set-up is amusing on its own, the confidence and competence at every level adds supplemental layers of depth and profundity. They unravel as the mind meditates its instances. Such adds a perpetually immersive luster to an already memorable bit of celluloid. Aided by terrific and endlessly watchable performances from Timothy J. Cox as the Catholic father, Peter, Rachel Lynn Jackson, as the Jewish mother, Ellen, and Max Abe Plush as Mikey, this is an all- around winner.

Loechler and Green’s tale focuses largely on Peter and Ellen. A pleasant enough, if rather mundane, discourse at dinner takes a noticeably disagreeable turn. Such occurs when faith slips into the dialogue. With young Mikey in ear’s range of the pair, the duo take the opportunity to use various methods, both derogatory to the opposing side and praising their own creed, to sway the innocent child to their side of the theological argument. This becomes, in the eyes of the parents, a battle for Mike’s moral direction. It is one which ends masterfully. We are given a concluding reveal that personifies another tremendously effective narrative choice on Loechler and Green’s behalf. Not only is it surprising, but it drives home the inevitable judgment sadly cast by some when they hear your doctrines do not align with their own. The last few minutes are a wonderfully strong punctuation point. It is one which re-states all that was communicated prior with brute force. Such makes this spectacular conclusion all the more riveting.

Among contributing the finely honed and competently crafted direction of this scant journey, Loechler provides cinematography which is striking, lush and alluring. His editing is just as skillful. The same can be said for Green’s nuanced and meditative screenplay. It is filled with credible, often successfully guffaw inducing, dialogue. What makes this all more operative is that Green has penned the type of speech one can easily hear erupting from the mouths of someone in the same combat Peter and Ellen become engaged in. These round out but a few of the various accomplishments visibly radiating from this production.

“Choosing Sides” works splendidly. This is true of both its laughter oriented and more sentimentally intense components. It also excels as a utilization of both genres to create a cohesive statement on the subject matter at hand. This is a rousing, well-executed and evenly paced undergoing. Though some may leave the labor offended at the picture painted, stating that such brawls would never derive from differing dogmas, the chronicle forces us to do as the title states. Such is an example of how accessible the characterizations are on-screen. It is also evidence of the participation we are pushed into inevitably. This, in itself, is verified proof of the emotive tiers buried immediately beneath the account’s apparently straightforward surface. All of these attributes join brilliantly. The outcome lingers with us long after the bit has settled. Such is evidence of the transcendence of the endeavor. It is also consequence of the volumes spoken in such a diminutive span. What Loechler and Green have provided here is challenging cinematic art; a sum which illuminates beautifully.