Director and screenwriter Phil Newsom has crafted a searing portrait of admiration, obsession and psychosis with his seven minute and twenty-two second 2012 short film, “Simple Mind”. Not only does the work issue a stunning amount of story in its scant runtime but, it also succeeds immeasurably at sharpening an intimate, understanding perspective of its otherwise villainous lead, Bob. The viewpoint established is a testament to Timothy J. Cox’s fabulous, alternately vulnerable and menacing, portrayal. This is also noticeable in the claustrophobic sensibility Newsom so masterfully constructs throughout. A slow motion sequence of Bob running, heart heard hammering in the soundtrack, which opens the affair, proves such successes. The audience becomes one with the character immediately. Later moments, which seem to be gazing into his eyes as they look around at everything but the camera, as if into his soul, as well as the frequent focus on the area around such lenses of sight while he speaks are brilliant, hypnotic and haunting. These segments heighten the overall atmosphere of the piece immensely. Moreover, these instances are among the many such bits where the arrangement visually exemplifies Bob’s own personality.

On much the same note, the story, as well as the manner it is told, is certainly layered. It captures our attention immediately with its fanatical stalker/ love narrative. It only grips us all the more as it becomes gradually becomes darker, its thriller elements all the more apparent, and even more captivating. Newsom tells this story through a series of flashbacks. This decision makes the endeavor come across even more as a trip through the fractured psyche of a disturbed individual. We learn about Bob as he does, peeling away every coating with increasing interest and horror. Yet, it avoids making Bob out to be another garden-variety deviant at every turn. Because of this we find ourselves all the more sensitive to his contemplations and often greatly concerned for his well-being. This is just one example of how well Newsom defies both conventions and anticipations.

The chronicle concerns Bob’s discovery of himself through repeated therapy sessions. During this time, he confesses to a violent impulse to his counselor, Samantha (spectacularly played by Kristi McCarson). This instinct Bob attributes, in one of the most chilling scenes herein, to being his only measure of achievement. It’s delivered in a startling, mesmerizing, terrifically underplayed quip; a centerpiece in a composition where all the previously stated words apply. The final reveal is just as jarring. It commands us to reassess the package as a whole. With it we confront the Hitchockian cleverness visible in its effortless manipulation of audience expectations. 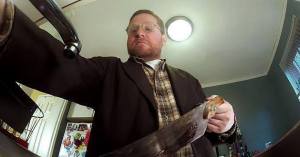 The technical aspects are just as astounding. Paul Nameck’s cinematography and editing is gritty, raw and perfectly suited for a tale such as the one Newsom presents. Keith Campbell’s music, with additional contributions from Jeremy Gonzalez, is evocative and effective. Newsom’s screenplay is a blueprint for a well-conceived suspense yarn. Incorporating authentic dialogue that drips with intrigue, motive and exposition that is smartly woven into the fabric of the account, Newsom’s writing is just as riveting. It is on par and as unique as his directorial handling. Most impressive of all, Newsom packs an incredible amount of twists into a compact runtime. Each sequential turn being all the more surprising and delightfully macabre.

Newsom has given us a taut, fast-paced rollercoaster ride with “Simple Mind”. It fascinates viewers as much with its unsettling take on self-discovery as it does with its various, and beautifully executed, nail-biting sections. Both of the personas on-screen are equally absorbing. Bob is a bold, dynamically explored and fully fashioned individual. Samantha is enigmatic and enthralling. By keeping the characters at the forefront and giving us an effort that is full-bodied, competently done in all respects and strikingly balances both its thriller and dramatic touches: Newsom has crafted a tour de force for fellow genre addicts. This is a must-see for those who like to think as well as scream.