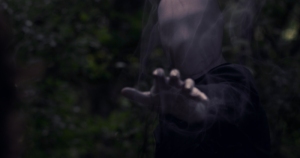 Flay (2017), from screenwriter Matthew Daley and director Eric Pham, is an inventive, well-mounted and visually stunning exercise in paranormal fear. A dazzling sequence near the half-hour mark, which showcases a small geyser of blood slowly spiraling upwards towards a lone ceiling light bulb, splendidly backs up the effectiveness of the latter term. Yet, there is a dramatic undercurrent to the proceedings. It is one which is rigorously rooted in the familial bond. Such makes Daley and Pham’s credibly etched on-screen personas richer. This can also be said of the naturally intriguing story. It also makes the proceedings evermore plausible. These fundamentals enhance the dimension and scope of the ambitious 93-minute picture. There is also a plethora of beautifully honed, time-honored frights. Even if the exertion is a bit too reliant on the evil figure lurking in the background trope, this article helps make for an endeavor that is nail-biting fun. It is also an exceptional display of cinematic craftsmanship. From the chilling opening narration to the rousing finale, Pham imprints these assets proudly on every frame of the film.

Pham’s masterful opus chronicles the heroine of the tale, Moon Crane (in a commanding and layered portrayal from Elle LaMont) returning to her home after the sudden death of her mother, Patricia (Peggy Schott). Having alienated herself from her family for an extended period, Moon uncovers turbulence in her relationship with her younger brother, River (in an excellent turn from Dalton E. Gray). It is also reflected in her own personal dealings. Soon Moon begins having horrific visions. After a cursed object belonging to Patricia is stolen, Moon finds herself trying to stop the slaughter of the faceless title fiend (in an undeniably menacing depiction from Jordan LeuVoy). This is with the assistance of her ex-boyfriend and police officer, Tyler Foreman (in a gripping depiction by Johnny Walter).

There is a tense sense of mystery to the events that unfold in Pham’s production. This is a constant source of exhilaration. Though Daley’s confidently paced script utilizes some formulaic elements in its construction, this former stated attribute helps elevate the movie far beyond the general expectations of the genre. Such a strength is a courtesy of Pham’s claustrophobic and assuredly skillful guidance of the project. There is a grand artistry to how a great number of the scenes are shot. It heightens the buildup. Moreover, this quality often gives the proceedings a highly admirable Dario Argento-like veneer. Gary Tachell’s immersive cinematography, Adam Ketcham’s sharp editing and Akihiko Matsumoto’s music make these bits increasingly hypnotic. This can also be said of the respective contributions from the make-up, effects and sound department. All of whom offer superb work. Alessandro Sereni’s set decoration is excellent. Correspondingly, Violett Beane is riveting as Bethany. A. Michael Baldwin is terrific as Billy Salcedo. Additionally, the continually ominous tone of the piece adds to the overall enjoyment.

In turn, Pham has erected an envy-inducing effort. It is one that is punctuated by solid dialogue, challenging themes and satisfying character arcs. The scares are handled in an always welcome and refreshingly subtle way. Partially inspired by the Japanese legend of the Noppera-bo, Pham’s flick calls to mind the American remakes The Grudge (2004) and The Ring (2002). Regardless, this approach is far more successful in this more recent exertion than it was in these prior examples. Also, the post-credits scene in Pham’s feature is certainly captivating.

Pham has incredible talent. Flay, which is scheduled to be released on digital March 6th, 2018, is full-bodied proof of this statement. I look forward to seeing what future celluloid wonders he has in store.