Bonejangles (2016), the second full-length feature from director Brett DeJager, is the perfect midnight movie. It is campy, creepy, uproarious and outrageously entertaining. The affair is also lightning paced and energetic from the get-go. The script, from Keith Melcher, vastly enhances the lean seventy-seven-minute project. This is with clever, tongue-in-cheek dialogue. Melcher also incorporates an abundance of equally witty parallels to time-tested slasher franchises. The most notable of these involves Bonejangles’ father, Edgar Sr. (in a phenomenal turn from Reggie Bannister). It is glimpsed solely in flashback. This early bit oversees Edgar Sr. motivating our engagingly engineered antagonist to kill. The primary reason to do so is one repeated, memorably hilarious line. Such a segment easily calls to mind the legendary slasher, Jason Voorhees, being similarly roused by his mother, Pamela (Betsy Palmer), in the Friday the 13th series. Such winks at the audience only amplify the fun factor DeJager’s triumphant horror/comedy produces immeasurably.

What also assists matters is that the movie ingeniously finds a way to respect the clichés of its sub-genre. This is while giving us a plot that is assuredly amusing and strikingly original; a perfect pulpit for a film of this ilk. It concerns a gathering of police officers. They are transporting our title villain to an asylum. Upon doing so, they find themselves in a town that is simultaneously cursed and being taken over by the living dead. Quickly hatching a plan to rid said municipality of their zombie problem, the cops unleash their once captive madman onto the surrounding area. This results in a wildly enjoyable ride; a side-splitting, in all senses of the word, tour de force. 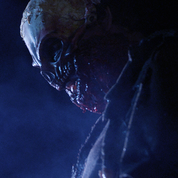 Lesser efforts would’ve used this intriguing evil vs. evil concept to craft a parade of violence that runs the entirety of the picture. Though DeJager’s effort will assuredly please those who like to indulge in cinematic bloodshed, the labor one-ups this excellent narrative backdrop by going in several wholly unpredictable places. This is most evident in the second and third acts. More specifically, when a certain ominous, plot-serving character is introduced. The aforesaid section also proves the captivating and inventive means of exposition DeJager’s photoplay conjures. This is when dealing with a situation as that which was previously addressed.

Besides opening with one of the most terrifying and attention-garnering instances in the picture and concluding on an equally well-done note, DeJager’s undertaking is graced with incredible performances. Everyone involved takes the wide range of serious to comic on-screen personalities to entertaining extremes. Elissa Dowling is especially good as the no-nonsense Rowena. Additionally, the cinematography from Shaun O’ Connell is illustrious. It amplifies the seamless mood of the exertion beautifully. Ben Gersch’s special effects make-up and DeJager’s wardrobe work are just as spectacular. When combined with imaginative bouts of slaughter and central figures that rise above their deliberate familiarity through sheer prowess and charisma, BoneJangles emerges as an a uniquely effective B-movie. DeJager has crafted an all-around winner.

Bonejangles will be unleashed on Video on Demand July 18th, 2017 through Wild Eye Releasing. 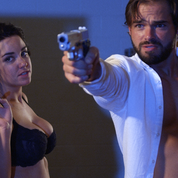