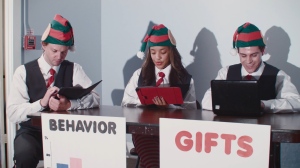 Fairfield Follies (2017), the debut feature from writer-director Laura Pepper, is a sharp, charming and frequently funny comedy. Yet, the one-hundred-minute picture succeeds most masterfully in its humorous tackling of stereotypes. Nearly everyone we encounter in Pepper’s effort falls prey to such typecasting in one manner or another. This latter declared quality could’ve easily created overly aggressive and unlikable characterizations. Yet, Pepper reveals a child-like incredulousness in those we encounter on-screen. Such an influence shields them from such harsh criticisms. Still, it never makes any excuses for their hateful actions. Likewise, there is also an everyday value to the blemished personalities our leads exude. Such makes our resident protagonists, as well as the film itself, more mirror-like to our contemporary world. The result is a highly satisfying and memorable example of the profound depth that laughter can convey.

Pepper, via her quietly biting and brilliant screenplay and deft guidance of the project, centers the entertainingly plotted narrative around the traditional title Christmas pageant. It commences with Ms. Evans (in a stellar turn from Susanne Colle), a woman who is prone to spontaneous sickness and blackouts, taking over as administrator of the undertaking. This is in place of the elderly Mrs. Whitelove (in a bulls-eye enactment from Mary DeBerry). The latter is the most biased of those in Pepper’s affair. This detail is smartly woven in an uproarious commencing arrangement which is upbeat and joyful. That is until Mrs. Whitelove whispers a slew of derogatory terms into Ms. Evans’ ear. From herein, Ms. Evan’s idealistic notion of turning the annual sketch-driven play she is tasked with putting together into an all-inclusive holiday gala gets skewed. This is by the politically incorrect cast and crew. In so doing, Ms. Evans’ goodhearted concept is shaped into an unintentionally offensive exercise in jaw-dropping chaos. 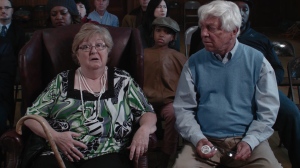 There is a consistently breezy demeanor Pepper instills into the proceedings. It impeccably befits the well-paced material. When combined with the behind the scenes action that endures until the hour mark and the unfolding of Ms. Evans’ program in the closing forty minutes, the movie itself is ever-intriguing. It also seems to contain a wisely theatrical quality. This is much in line with the show our heroine is frantically trying to erect. It is also reflected in the deliberately straight-forward, but nonetheless effective, cinematography of Jill Poisson. This clever parallel is also spied in the often-enigmatic individuals Pepper implements in her tale. Such an aspect is also transported in the manner Pepper moves the account forward. This is with many of the passages throughout the entirety becoming itself a singular skit tied around a larger plot thread. For example, one of my favorite moments involves Max (in a standout performance from David Ryan Kopcych) practicing his dramatic, almost musical reading of the Chinese takeout menu. Such a segment transpires at around the half hour mark. This becomes a running gag which is utilized throughout the duration of the runtime. Yet, the witty section in which this initially arises has an intimate actor and audience sensibility. This certainly evokes a stagy impression. Even the smirk-inducing post-credit bit, which encompasses Pepper appearing to address unseen spectators, splendidly reinstates this factor. Such also immediately expunges the inconclusive sensation that stems from the quick final episode. This is spied before these cunningly constructed acknowledgments roll.

The two-location project, which alternates between Ms. Evans’ home and the interior of the building where the play is being honed, is also graced with skillful and endearing performances all-around. Anna Rizzo is terrific as the cellphone obsessed Kelly. The same can be said for Johnny Sederquist’s turn as Jeremy. Rosemary Pacheco is charismatic and captivating as Melissa. Correspondingly, Dan Greenleaf is especially amusing as the drunken Santa Claus of the project, Paul.

From a technical standpoint, Pepper’s editing is superb. Phillip Martin’s music is innovative and lively. It captures the spirit of the story masterfully. Pepper’s animation and Poisson’s digital effects are similarly excellent. The camera and electrical contributions, as well as Anna Goodchild’s costume design, are all magnificent. Relatedly, the sound department delivers a largely proficiently to the overall prowess of the piece. This is even if some of the songs in Ms. Evans’ fabrication come off as indecipherable because of such an attribute.

There are several loose ends in this Peppered Productions release. For instance, Ms. Evans’ mysterious ailment is never satisfactorily resolved. Though this holds the photoplay back from perfection, it is overshadowed by the sheer variety, inventiveness and consistent successfulness of the guffaws on hand. But, Pepper also works just as well with the notion that most of the individuals in her fiction are themselves archetypes. For hordes of cinematic craftsmen, this would be a flaw too glaring for patrons to overlook. Yet, Pepper has intentionally instilled these traits in our leads. This is to punctuate the pigeonholed categorizations that these beings often verbalize via Pepper’s ingeniously penned dialogue. It gives bystanders a method to study the theme of this tour de force from both within and without. Best of all, Pepper finds a stupendous balance between the heady subtleties of her flick and the light-hearted spirit that pulsates on the surface. Such creates a labor that is as quietly meditative as it is quirky and fun. Ultimately, Pepper doesn’t weigh down her plot in her finger-waving and lesson learning. But, such practices still illuminate the presentation. Such is just one of the numerous items which make Pepper’s effort so special. With Fairfield Follies, Pepper has given us one of the best genre concoctions of the year. I highly recommend seeking it out.