VooDoo (2017), the eighty-four-minute full-length feature debut from writer-director Tom Costabile, is a surreal, delightfully disturbing and triumphantly terrifying midnight movie. It is also wickedly entertaining. Likewise, the HyperCube Films production hits a stride in its second half. This is with a relentless unveiling of gothic horror events. All of which perpetually calls to mind Sam Raimi’s masterpiece The Evil Dead (1981). Additionally, there is a midway instance that showcases a door slamming shut by itself. We are also given a dark entity with red eyes in this section. Such adds to the sheer cinephile delight on-screen. This is as such tried and true genre tropes, all of which are well-done and are presented in a manner that feels consistently fresh and new, draw a distinct parallel to Stuart Rosenberg’s classic adaptation of Jay Anson’s iconic best-seller, The Amityville Horror (1979). Yet, the last half hour is full of haunting, jarring, claustrophobic scenarios and images. All of which seem immediately pulled from the zenith of brimstone and hellfire that is Dante Aligheri’s epic poem, The Divine Comedy (circa 1308-1320). Such makes this assuredly entertaining release increasingly enjoyable. Best of all, Costabile, through his dazzling and taunt guidance of the project, mounts these sequences brilliantly. In the tradition of the greatest endeavors into celluloid fear, the scares begin with a fun, but effective, approach. Yet, as they go on they become far more unnerving. This is with each proceeding fright becoming more unsettling and memorable than the one which we encountered previously. It ends on a note that, though respectful to the foundation laid down by countless other found footage style flicks such as this one beforehand, is perfectly eerie. In turn, Costabile finds a punctuation point to his terrific endeavor that is hauntingly constructed. Moreover, it is guaranteed to leave audiences with a lingering sense of unrest long afterwards.

Costabile wraps these beautifully executed occurrences around an intriguing, if familiar, plot. The narrative concerns Dani Lamb (in a credible performance by Samantha Stewart that vibrantly captures the personality of her innocent, southern girl lead). She imparts on a vacation to Los Angeles. Here she stays with her cousin, Stacy Cole (in a depiction by Ruth Reynolds that is every bit as charismatic and well-wrought as the portrayal exhibited by Stewart). While exploring the city, a sinister link from Dani’s past finds them. Soon Dani finds herself in an apprehensive situation that quickly spirals out of control. After her daylong journey through “The City of Dreams”, Dani returns to Stacy’s quaint home. This is to be greeted by a black magic fueled nightmare. 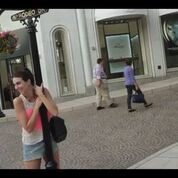 The Costabile penned screenplay for this tale is structured, paced and characterized routinely. Yet, it is so tremendously put together that these attributes do little to tarnish the overall quality of the exertion. For example, after a genuinely chilling opening portion which depicts the abduction and ritualistic slaying of a young child, the affair provides exposition in the expected manner. This is as Dani and Stacy merrily discourse among one another as they discreetly drink Bloody Marys, sunbathe and immerse themselves in the sights of local California. The often jovial banter among the duo is also rooted among commonplace grounds. Much of the first forty minutes of the endeavor goes about in this fashion. Yet, these moments work. This is because there is an organic chemistry of friendship and likability to Dani and Stacy. When combined with the natural allure of the views the two partake in, the effort is breezily engaging. Because of this, Costabile’s motion picture rises where many similar entries fail. This is in getting us to genuinely become enraptured in the plight and care for our central figures. Given how gorgeously conceived the apprehensive components of this presentation is, such makes the balance between terror and real-life drama even more impressive and well-rounded.

Both the upbeat and seriously dread-inducing segments of the opus are masterfully erected. This is via David M. Brewer’s suitably gritty, yet consistently impressive, cinematography. Costabile and Alec Justin Henderson (who also takes on the role of “Sunset Playboy” nicely here) administer editing that is terrific. It is at times deliberately ragged. This is most evidently perceived in the aforestated commencing bit. Such a finely honed detail adds a sense of mounting intensity. This is built upon the confusion of the unexpected. It is what both potential victim of the account as well as patrons may be undertaking when witnessing such a scene unfold.

Furthermore, Christian Alexander, Albert Adams Polinsky, Adam Rettino and Seth Thomas exhibit incredible set decoration. Dean Guilotis, Bo Howe, Lior Molcho and Frank Synowicz distribute hallucinogenic, top-notch visual effects. The eight-person sound department, the camera and electrical as well as the make-up team all offer proficient turns. Melanie Macugoski’s costumes are rich and authentic. Composers Michael Dino Boito and Nathan Kwan reinforce the ominous atmosphere of the release magnificently. This is with a score that is sparse, but surely operative. It has such an instantly legendary impression that you can almost imagine Dracula himself playing the tune on a creaky, old piano.

Correspondingly, Dominic Matteuci is phenomenal in his representation of Spencer Boyd. Daniel Kozul as Trey Neil, Richard Krey as Bum and Constance Strickland as Serafine L’Amour are solid in their respective arrangements. Timothy Patrick O’Neill is exceptional as Uncle Jake. A cameo where Ron Jeremy plays himself, spied at sixteen and nineteen-minutes in, is smirk-inducing; a pleasant wink to the audience. The gathering of those who bring the assorted demons, minions and nefarious figures unveiled herein to life are all responsible for wonderful enactments. They vastly enhance the grim tone the photoplay gives way to in its later stretches.

The result is an undergoing that is sure to delight both budding and seasoned aficionados of nail-biting, supernatural cinema. With this excellent composition, Costabile has established a command of mood and buildup. This can also be attributed to the seemingly unproblematic fashion in which he develops his on-screen personas. Such makes it easy to state that Costabile is a director to be watched. His cast and crew prove themselves just as capable. He has evoked a heart-pounding rollercoaster ride of a movie. To its further benefit, it has a plethora of ghastly circumstances and ideas. But, it never falls into the trappings of being excessively graphic to illuminate these notions for maximum impact. Such is one of a variety of wise moves in a labor filled with such smart decisions. It all comes together to generate a wonderful exercise in cinematic anxiety. Such is one addressees will undoubtedly want to return to repeatedly. VooDoo hits select theaters across America on February 24th, 2017.

The Facebook page for the film can be found here. 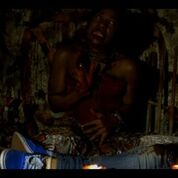