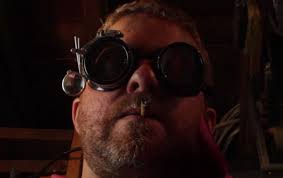 Director Matthew Mahler’s eleven minute short, “What Jack Built”, works tremendously well. It forces the imagination to look under its murky, brooding corners, retrace its steps and put the many enigmatic items of its narrative together themselves. The overall intensity and interest of the piece is garnered largely from the craftsmanship of the mystery at hand. This is just as true of Mahler’s skillful handling of the material. Such is a brilliant manner to tell a tale like this. Mahler provides a dialogue free composition. This is another smart move. It heightens the intrigue immensely.

We watch the cigar-smoking and brooding, Jack (Timothy J. Cox, in another mesmerizing and masterful enactment), as he puts together blueprints in a secluded basement. He is also seen laboring over a trapping device. This is for the wholly concealed fiend lurking in the woods as well as inspecting his security cameras. Audience patrons view the succession of these immersive, hypnotically constructed and intriguing sequences of the affair’s arc in wonder. They are forced to uncover the meaning behind Jack’s actions themselves. This just adds to the appeal and quality of the item immensely.

What is going on inside of his psyche? How did he come to think of this device? What is its purpose? How did he put it together? Since he is the only one we meet, is he the only one left alive? What is exactly is this creature in the woods, if that is in fact what it is, he appears to be combating? Are they truly at war with one another? Are they linked somehow? It’s fascinating to ponder and assess these questions, left unanswered by the actual account, and come to our own conclusions based on the wisely sparse bits of details Mahler provides. These lack of particulars are a deliberate inclusion on Mahler’s behalf. Such is a bold choice that pays off handsomely. The result of this already attention-garnering saga is amplified by the minimalistic approach. The consequence is elevated far more than it would be if it was told in a traditionally straight-forward manner. This is not only thanks to Mahler’s taut direction, but also the cleverly paced, electrifying and meditative screenplay. This was penned by Matthew and Ross Mahler.

The title alone suggests a bit of a parallel to the popular British nursery rhyme, “This is the House That Jack Built”. In retrospect, it can even be perceived as an apocalyptic aftermath of the absurdly comic events that transpired in that tale. Yet, with a far more mature tone. “The man all tattered and torn”, as the folktale states, certainly applies to the brooding Jack realized in Mahler’s fabrication. He appears haunted, as if by the measures transcribed in the poem. Cox portrays this excellently. Not to mention, there is an underlying aggression to his motions. It is one which backs up the previously stated line splendidly. It is grasped in the various facial expressions Cox so expertly instills into the protagonist. Maybe this all circumstantial. It could be that this theory has nothing to do with its similarly captioned brute. But, it is this uncertainty, the many ‘what-ifs’ the endeavor captivatingly radiates, that makes it so thought-provoking and endlessly stirring. 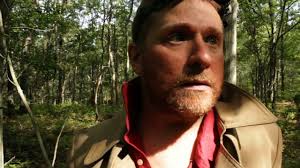 Matthew Mahler also issues music which is as spellbinding and ominous as the article itself. He utilizes a creaking soundtrack, reminiscent of one conventionally heard in a feature by Dario Argento, to chilling effect. It also sonically re-instates the endless atmospheric of the exertion beautifully. It makes the moments in the depths of the secluded area where Jack is hiding, as well as the ventures into the outside, all the more fearful and suspenseful. Adding further technical success to the project is Mahler’s sharp editing. There is also an inspired flare to the chronicle. The instances the smartly never spied beast is sensed creeping through the surrounding landscapes is reminiscent of the recurring shot which opens Sam Raimi’s The Evil Dead (1982) is where this is most evident. Even the setting itself calls this comparison to mind. Yet, Mahler’s attempt is far more than a simple homage. It is entirely its own entity.

In scenes such as the one recently addressed, Mahler’s aforesaid sonic contribution is most proficient. Yet, his appropriately dark, gorgeously honed cinematography drives this magnificent attribute home all the more victoriously. He also instates a credible, well-done input to the costume and wardrobe department. John Heirlein’s art department influence strengthens the believability and stalwart nature of the proceedings just as well.

This 8mm Films production is a true marvel. In an era where so much of cinema goes out of its way to show and tell, in excruciating specificity, its spectators what is hidden behind every door and explain every secret within a moving picture, “What Jack Built” is all the more necessary and refreshing. Those who expect everything ushered there way as far as a fully-fleshed out yarn, character development and all of the other trademark tools of the storytelling trade may find themselves frustrated. Such would be in the manner in which Mahler ceaselessly defies these expectations. They are assuredly the ones who will be put off by the undefined sum of the effort. Yet, those of us who like a new experience, one which gives us more inquiries than responses, will feel liberated.

Mahler drops us immediately into the exploits as if in the middle of a fiction already in progress. From herein, we are with Jack, hanging on his every motion, riveted through the duration. Despite the intentional vagueness of much of what we encounter, this can also be understood as an admirable experiment. This test concerns how much can be stated without a single word. Yet, the investigative nature reaches far beyond this single boundary. There is genuine risk-taking incorporated at nearly every turn. It makes the outcome all the more harrowing. For those of us who enjoy innovation as well as an adventurous take on the thriller, Mahler’s undertaking is a mandatory dose of adrenaline. It is a fantastic, illuminating, nail-biting spectacle which demands to be witnessed.