Accidental Incest, based on the off-Broadway production (published through Indie Theater Now) by Lenny Schwartz, plays like a gloriously successful mash-up of John Waters, Kevin Smith and South Park creators Matt Stone and Trey Parker at their most riotous and wildly unhinged. Schwartz has engineered a consistently funny, beautifully constructed and intelligent screenplay adaptation. It is one that is alternately meditative and unabashed. Likewise, it is consistently cunning, engaging and conclusively uplifting in its own respect. These elements assist in making this one hundred and two minute piece undeniably bold. Not only is this visible in the taboo bridled title subject matter, with much of its humor deriving from its sexual frankness, but also in the stances it takes against religious persecution. Additionally, the faux sense of superiority instilled in those who take the reins of such facets. This is the increasingly rare feature that utilizes the comedy genre as not only an instrument to entertain but, also, to drive home its timely thematic conscience. From the first effective comic segment, a tone-setting quote by Irving Berlin that flashes over a dark screen in its initial seconds, to the splashy extravaganza marking its heaven sent conclusion: the proof of this statement reverberates through every frame of its expertly paced one hundred and two minute runtime. This audacity is also visible in the unconventional manner the endeavor is told. It is just as foreseeable in the truly impulsive chain of events which dominate the general story arc. Such makes the whole affair endlessly intriguing; a vigorous breath of fresh air for those of us who are long exhausted, dulled to fury with the timid, rote manner in which the genre of laughter is so often served up on the silver screen. 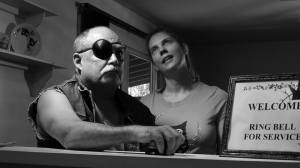 The narrative concerns Milton and Kendra (courageous, attention-garnering enactments by Johnny Sederquist and Elyssa Baldassarri that are full of surprising dimension and heart). After an extended six-minute opening, that is just as successful in establishing Milton’s carnal promiscuity as it is the string of rousingly victorious and well-timed unorthodox gags which pop up throughout the duration of the picture, our male lead swears to better himself and absolve such sinful deeds. Cut to Kendra waking up “Somewhere in Mexico”. She is disoriented, disrobed and has little remembrance of how she got there. As can be readily anticipated, the paths of the two unite during a motel stay. A date soon ensues that pushes the promises the two have made quickly out of the way. After finding out that they have the same father, their collective passions and fleshly indiscretions heighten to new zeniths entire. Eventually,  this anything but standard issue romance is tested. Such occurrs as the outside world, especially a pair of religious fanatics that the second half of the chronicle gets to know in depth, try to enact their fervent sense of moralism upon them.

This represents another show-stopping exhibition of range for both Scorpio Film Releasing and the incredibly talented and the always reliable director, Richard Griffin. Being his third collaboration with Schwartz, their first such venture was the spectacularly inventive 2012 slasher saga Murder University and the 2013 drama Normal, the duo remain a terrific creative team. Griffin, who is marked as the ‘Drunken Film Director’ in the end credits, and his behind the lens work here is the perfect combination of indie artistry and its respective spirit. In particular, his ability to bring us something wholly unique and liberated from the conventional trappings of mainstream cinema. This characteristic is visible in the ravishing manner in which it incorporates five endlessly uproarious tunes throughout. Each of these ravishing, anything but commonplace ditties are every bit as side-splitting and amusing as the one which came beforehand. Among these are the Crimson-Al Khelmia (who depicts Angel #1) penned ditty “Nicolas Cage”, which utilizes the title actor’s movies as erotic innuendos with magnificent results, and “Circuit Board Christ”. The latter track oversees The Lord, God Almighty (played with fervent relish by the author of the number, Aaron Andrade) displaying his lyrical prowess in what can be described as a dead-on parody of modern hip hop clichés. Not only are these show-stopping, off-the wall segments that represent the un-fettered spirit of the piece entire but, they are among the best moments in the entirety of the exertion. The send-off tune, “Sentimental Incest”, sung by Jesse DuFault, The Young Adults performed and co-scribed “Kill Yourself”, and the Mark Cutler authored and Patrick Keefee executed, “Next Door Neighbor”, are unswervingly adroit. Such sonic oddities, and the routines which often accompany them, simultaneously remind us of the story’s stage roots (as does the leads’ various intimate discussions with the camera as if such is a silent audience). Similarly, it succeeds as both extensions of tone and sheer entertainment. Griffin, true to the form he established in earlier endeavors, drapes the project in nods to various other genres. An example of this is seen in a repeated shot of a sign for a motel. Composed over Jill Poisson’s gorgeous and sleek black and white cinematography, this scant segment wonderfully calls to mind a noir fabrication from the 30’s. Yet, despite such occasional departures the general demeanor of the composition is rooted in our modern times. The attitudes and point of views from the personages on-screen highlight this point incessantly.

Not only is this escapade beautiful to look at, with its brief color bits as eye-catching as its aforementioned classic cinema veneer, but its allure stretches beyond the screen. There are layers of emotion to the tale that are made all the more immersive and powerful due to the sheer talent at hand. Timothy Fife’s music is brilliant. The visual effects by Jill Poisson and John Dusek are skillful and astounding. Griffin’s contribution as editor is just as exceptional here as it was in his previous escapadeses such as 2015’s similarly genius Seven Dorms of Death and Flesh for the Inferno. Angela Shulman’s art direction is astounding. Also, every cast member is spectacular in their roles and make them wholly their own. Tonya Free as the oblivious wife of a homosexual, Susan, does a fantastic job of delivering wild guffaws. This is through the medium of facial expressions and the well-hewn dialogue coursing throughout the affair. Jose Guns Alves as The Anxious Man, Anna Rizzo as Tabitha, Jamie Lyn Bagley as Jen, Jesse Dufault as Rex and Christian Masters as Alex fare just as incredibly. Laura Pepper delivers another display of her magnificent rib-tickling aptitude in her brief, but certainly memorable, part as The Brain Damaged Wife. Bernard Larrivvee Jr. is just as stupendous as the eye-patched hotel manager. Paul Lucenti as Issac, Kevin Kilavey as Tool, Dan Mauro as Bob, Sean Carufel as Wesley, Christopher L. Ferreira as Tyler, Rich Tretheway as Kevin, Ryan Hanley as St. Peter, Michael Thurber as Harrison, Rosemary Pacheco as a receptionist, Sissy O’ Hara as a landlady, James Bagley as a doctor, Mark Hutchinson as a bartender and Steven O’ Broin as Dr. Emil Locust are delightful in their corresponding depictions. Knate Higgins as Sven, Casey Wright as Ariel and Erin M. Olson as Mary also embody their portrayals just as masterfully as those mentioned previously.

Griffin and Schwartz’s latest collaboration is an example of high-risk taking resulting in a singular, innovative and distinctively captivating experience. There is a finely etched concern for all of the individuals we meet along the way. It is both smart and exuberant. Furthermore, the arrangement entire showcases proudly the admiration for motion pictures of the past and present. This has become another of Griffin’s many charming staple attributes. In an age when mainstream romantic-comedies are so by the numbers we can predict every movement the story takes before we even sit down to view it, Accidental Incest seems determined to take these routine twists and demolish them. In turn, we are delivered a completely capricious undergoing. The result is wall to wall cackles at situations ‘polite society’ would turn their nose up at. There is also an unexpected mirth, a merriment to the proceedings that is genuine. Such is another component multi-million dollar Hollywood productions package artificially, as if via an assembly line. Griffin’s feature is a grand masterpiece; authentic, rousing and both ground and rule-breaking. For those of us who enjoy boundaries being pushed so far away from our eyes that we are capable of enjoying the briefly held sense of being truly and utterly free: this feature, along with all of Griffin’s other celluloid journeys, should go immediately to the top of your ‘must-see’ list. 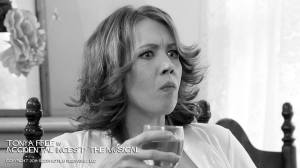