Kenneth Powell and Thomas Edward Seymour’s VHS Massacre: Cult Films and the Decline of Physical Media (2016) is a riveting exploration of the effects of VHS, DVD, Blu-ray, downloading and streaming on independent photoplays. The subject matter alone is naturally fascinating. Yet, Powell and Seymour’s documentary benefits from a variety of insightful interviews from cinematic insiders and commentators. They include the head of Troma Entertainment, Llyoyd Kaufman, actress Debbie Rochon and legendary critic and author John Bloom (Joe Bob Briggs). Clocking in at a lean seventy-two minutes, the consistently absorbing and nostalgia-inducing project also benefits from the sheer likability of all those on-screen.

What is just as gripping are the many scenes where the crew of the venture go to different video stores. This is to record their experience. It is also to reminisce on the days when such establishments were thriving. Such bits are mesmerizing. The fun of that era, where previously unknown movies were fighting for patrons’ dollars mainly through the eye-popping nature of their cover art, is sent up well. This is most evident in a game spied throughout the duration. It ardently showcases those involved with the exercise going to various VHS sellers. Upon doing so, they see who can bring home the most interesting program. This is based solely on the above-mentioned criteria.

The obvious love for cinema that stems throughout, especially in the aforesaid segments, further heightens the delight at hand. This makes the times when the endeavor feels a bit like an advertisement for Rudyard Kipling’s Mark of the Beast (2012), which Seymour co-directed with Jonathan Gorman, easy to overlook. This can be exemplified during a mid-point intermission. At this juncture, the trailer for the formerly addressed presentation is shown. What also helps these minor flaws are that such episodes, as is true of the entirety of the exertion, are erected with cleverness, sincerity and good humor. These passages also potently reflect the underlying message and thesis statement of the affair.

Powell and Seymour, though utilizing an approach to the material that is routine, have crafted a work that is as much a love letter to technology as it is a warning against such advancements. This balance is spellbinding. Such makes this New York Cine Productions related effort evermore endearing. The result is as immediate as it is immersive. Augmented by outstanding editing, music and cinematography, this ambitious item is essential to understanding both the past, present and potential future of motion pictures.

Model Hunger (2016), the eighty-four minute full-length directorial feature debut from veteran actress Debbie Rochon, is cinematic madness. This is true in the gleefully off the rails tone Rochon so wonderfully presents. Such brilliantly intertwines the dark comedy of John Waters with the detailed splatter of an early tour de force from director Peter Jackson. There is also more than a touch of Troma Entertainment head, Lloyd Kaufmann. Ironically, the previously stated low-budget craftsman, and related company, Rochon has starred in more than a few films for. There is also a clear inspiration from the Italian maestros of terror, Lucio Fulci and Dario Argento, stylistically perceivable herein.

Such a component is also strikingly evident in Lynn Lowry’s vivid, increasingly unhinged performance. Lowry ever-intriguingly portrays the lead murderess with a deceptively gentle southern exterior, Ginny Reilly. But, one of the most remarkable feats Rochon and screenwriter James Morgart evoke is the delicate balance of adult humor and occasionally tongue-in-cheek, but largely serious, horror. The two complement one another throughout. Most remarkably, they are often orchestrated in the same sequence. Such only heightens the sensation of continually mounting lunacy which accompanies Reilly’s mannerisms. This is made all the more observable as the meritoriously made movie runs towards its sinisterly smirk-inducing climax. In addition, the effortless command Rochon and Morgart have over the material run far beyond the victorious interchanges and juggling of atmosphere and categorical shifts. 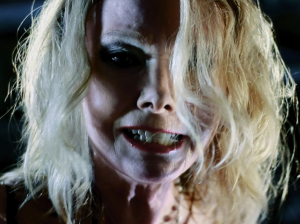 Rochon and Morgart begin the tale by following a pair of Spartans cheerleaders, Katie and Missy (Samantha Hoy and Lisa Dee, who both give determined renditions of the stereotypical genre teen), to Reilly’s door. In a narrative shift reminiscent of Alfred Hitchcock’s Psycho (1960), the focus for the rest of the affair turns suddenly away from these potential heroines. After several minutes we find ourselves unexpectedly following the villanious protagonist, and cannibal, Reilly. Embittered from the rejection she has received from the business which was supposed to welcome her with open arms, she enacts violent revenge on those who might’ve passed the modeling industry’s rigorous standards. Reilly’s secret doings, most of which involve inflicting pain upon her victims before killing them in her basement, are threatened when Sal Lombardo (an enactment by Carmine Capobianco that is commanding and proficient) and Debbie (an exhibition by Tiffany Shepis that is ever-engaging) arrive in the community. Slowly, suspicions arise. As the high body count of this presentation rises, this mutual misgiving only accumulates.

The story itself, perfect for a grindhouse undertaking such as this, has been done in various manners beforehand. Regardless, the structure Rochon and Morgart evoke is so unique, wholly original and unpredictable that such a criticism is decidedly minor. Moreover, the pace is breakneck. Reilly’s good natured façade is broken early. This is signaled as the bloodbath imparts at a mere eleven minutes in. Afterward, the progression of such terrifying instances rarely wavers. This is as the chronicle continually twists and builds upon itself. All the while, we are given just enough exposition into Reilly and Debbie to care for the both of them. This is considering the personal faults the fiction makes clearly visible throughout. This is done without breaking up the interestingly mounted arc and general movement of the plot.

We are given two key flashback sequences of exposition. One can be found around the twenty-five minute mark. The other is arises a little over an hour into the production. Both are well done. They sting with the disapproval of body shaming, as well as the equally odious idea of beauty and parental disapproval, which has leaves many so acrimonious. Still, the photoplay doesn’t weigh itself down with its social conscious. This is an entertaining, old-school, late-night fright flick. It simply uses this as a window into understanding the various psychosis that the labor concentrates upon. Such is also utilized as a potential key into the obsessions, a product of the aforementioned delirium, the depiction is concerned with unveiling.

It is mirrored through a program, which always seems to be about to air, called Suzi’s Secret. The show is played for laughs. It also triumphantly generates them. Regardless, it also potently and powerfully brings forth through the aforementioned modus. This item reinforces how the strict guidelines of appearance affects, not only some of those present in the fiction, but society as a whole. Such is another of the many remarkable feats this terrifically conceived opus naturally pulls off. 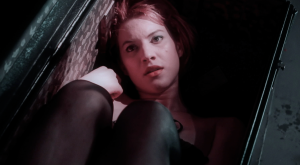 Similarly, Rochon’s behind the camera work is edgy and claustrophobic. Likewise, Morgart’s script is excellent. It provides the perfect celluloid playground for the players who inhabit the roles Morgart has penned to have wild fun with their turns. This is something everyone involved certainly notices and brings forth tenfold. To its further credit, the script also cracks with witty dialogue and characterizations. The piece walks the fine line between believability and the incredible. Despite this, it never breaks away from either. What is just as striking is Morgart’s clever and intelligent use of the age-old voice-over trope. Such narration comes from Reilly. This element is used in a manner that often reminded me of many of the nasty tidbits Margaret White would spout at her most overzealous in Stephen King’s classic novel, Carrie (1974). It also mechanizes expertly to augment the sense of Reilly’s perspective which radiates stalwartly throughout the picture. The incorporation of Michael Winters (a depiction by the continually fantastic Michael Thurber which matches Lowry’s portrayal in eccentricity and sheer bravura), as an initially pesky and almost voyeuristic neighborhood resident, adds to the bizarre intrigue transcendent through every frame. Simultaneously, the deaths are increasingly elaborate and imaginative. There is a torturous segment in the finale involving a virginal, “Restorationist” youth that is especially cringe-worthy. This particular section is as taunt, suspenseful and fantastically engineered as they come.

The New York shot and Wild Eye Releasing distributed account also sports an original score from Harry Manfredini, who is known for his legendary theme for Friday the 13th (1980). He gives us an illuminating, almost visceral orchestration. It resonates spellbindingly. The composition is frantic, complex and undoubtedly masterful. It, in the tradition of the greatest musical numbers in moving picture history, almost seems to jump right out of the framework and into our minds. Comparably, Wolfgang Meyer’s cinematography is grim and gritty. It gorgeously enhances the resonate mood of the endeavor. The same can be said for the smooth display of editing Darryl Leblanc provides. Relatedly, the sound, art, camera, costume and make-up department deliver in their respective fields spectacularly. Rochon’s exertion is impeccably cast by Richard Egbert. Suzi Lorraine, as the guffaw-inducing personality credited as TV Show Host Suzi, issues an endearing, standout demonstration. Additionally, David Marancik as Officer Jason O’ Bannon, Robert Bozek as Reginald Burke and Bette Cassatt as Chloe are phenomenal. This B-grade gem also showcases impressive special effects by Rod Durrick, Leblanc, Paul Mafuz and Ingrid Okola. The visual aspect of such a constituent, also constructed by Leblanc, is just as extraordinary.

With 246 acting gigs under her belt over a thirty-four year span, Rochon is more than acquainted with what makes audiences scream in both consternation and joy. She is also just as familiar with the inner-workings of the big screen itself. This is more than perceivable at any given interval of Model Hunger. Rochon has gifted her spectators, fans new and old, with a perpetually solid and dazzling addition to her ever-expanding catalogue. The photoplay is brutal, darkly comic, tightly-knit, thoughtful and engaging in equal strides. It is also more than willing to plentifully offer what viewers have come to commonly expect in the category of revulsion. It is rare that we get such a captivating combination of all these arrangements. Such is especially accurate of a gore drenched midnight movie. What is just as infrequent is for someone to prove their operative abilities on both sides of the lens so stirringly. Rochon, who remains a marvelous and ever-evolving talent, does just that and more. This is a winner. It will more than delight those who are left famished from the current trend of limp, anemic entries filling theaters as of late. Feed your appetite for a slickly erected and professionally made journey into insanity. See this delightfully morbid configuration at all costs. 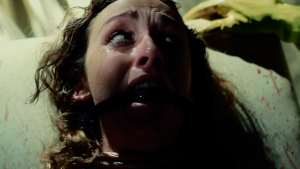