The Andrew Buckner/ AWordofDreams Summer 2020 Short Film Festival continues with films 9 and 10 in the 14-part series: “The Misplaced” (2018), directed by Alex DiVincenzo, and “Sisyphus” (2016). The latter was directed by David Graziano. Both titles are connected by the difficulties in a relationship setting the plot in motion. Each work in this pairing is also brilliantly acted and exceptionally well-done. 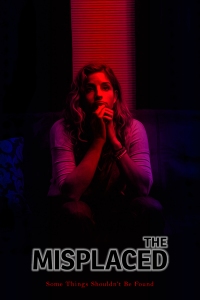 A young woman unwittingly discovers why things have been going missing around the house.

A young woman (Jamie Lyn Bagley) unwittingly discovers why things have been going missing around the house. See why some things shouldn’t be found in “The Misplaced”.

Greta and Marlene are two close friends who are both going through tough marriages. They share a long and secret history together and when one of them decides to make the next
move in their relationship by pursuing a wonderful moment in their lives, she is met with resistance. As time goes by their roles revise and they try to get back on track but like Sisyphus, they might be rolling a boulder up a hill just to watch it roll back down again.

Directed and produced by David Graziano

*All films included herein are included in full with the kind permission of the directors themselves. 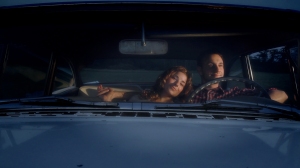 Trouser Snake (2016), the third short film from director and co-writer Alex DiVincenzo (2014’s “The Horrors of AutoCorrect” and 2016’s “Cybershock 1999”), plays as if the overblown “science” and informatory threats fashioned as lesson learning which made Refer Madness (1936) such a cult gem were repackaged as a deliberately uproarious 1950’s style creature feature. This is with the subject diverting from the purportedly “violent” dangers of marijuana. Such was the case illustrated to great comedic effect in the abovementioned Louis Gasnier directed and Arthur Hoerl penned presentation. DiVincenzo makes literal the idea of the “monster” that rises from the male anatomy. This is when said individual is confronted with an apparently unanticipated hormonal and sexual control. It is one which augments the naïve confusion of the teenage years. Such becomes the plight of our perplexed protagonist, Thomas (in a spot-on portrayal by Alexander Gauthier). All of this surfaces consequently to an extended bout of making out in a car with Thomas’ girlfriend, Lucy (in a phenomenal turn from Jamie Lyn Bagley). Such ensues at that notorious place in celluloid where such events always seem to stem from: Lover’s Lane.

DiVincenzo employs a variety of wildly triumphant jokes that pinpoint the outdated nature of Thomas’ gullibility. Most noteworthy of which is a brilliant sequence at nearly three minutes into DiVincenzo’s four minute and forty-nine second undertaking. This is from what can be perceived as a modern perspective. Such is derived during a family dinner. In this episode, Thomas tries to have an open discussion with his family concerning his current plunge into adulthood. It is at this point his much younger sibling, credited simply as “Sister” (in a terrific depiction by Morgan Walsh), says in a matter of fact manner: “Even I know about the birds and the bees, Thomas.” 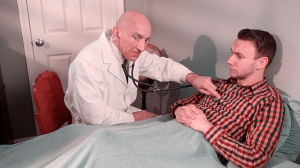 This gag is undoubtedly amusing. Yet, it is a number involving the sudden slanting of a table that comes immediately after Sister’s words that is the centerpiece of the entire segment. Such also endures as one of the most successfully hilarious instances visible throughout the runtime. Another thematically linked highlight arrives both before and prior to a spectacularly issued, black and white post-credits sequence. This latter stated item concludes with the announcement, which I sincerely hope DiVincenzo makes good upon, that the “Trouser Snake will return in ‘Bride of Trouser Snake’ “. These already mentioned guffaws are exceedingly clever. They are also among the best uses of the amorous parallel DiVincenzo utilizes with the presence of the antagonistic fiend of this enterprise spied throughout this Grimbridge Productions release. Such instances are as cringe-worthy as they are, in various usages of the term, climactic.

Made for a mere $100, DiVincenzo’s invention is boosted by another outstanding, gleefully tongue-in-cheek performance. This is from Michael Thurber. He enacts Thomas’ specialist, Dr. Mason. Thurber bends the character in the ways of many associated clinicians from both the decade and genre DiVincenzo models his tour de force after. Such is orchestrated both readily and engagingly. He delivers exposition, most of which the audience is already informed of, with a merry, knowing wink to his unseen spectators all along. Such makes the scenes he is in sing with a heightened layer of underlying wit. This matches the tone of the piece beautifully. William DeCoff as Thomas’ father, Hugo, and Monica Saviolakis as Thomas’ mother, Joy, also offer similarly astounding depictions. The result is a herculean effort that is made incredible by the stalwart essence of those on-screen.

The brief affair is also graced with an appropriately cheery, splendidly done veneer. The look of the endeavor is like that of a classic, monochrome motion picture. Particularly, one that was colorized before being broadcast on late night cable television. Such cinematography, courtesy of Jill Poisson and DiVincenzo, further enhances the B-movie correspondence DiVincenzo proudly strives for throughout the exertion. DiVincenzo’s editing, script (co-authored by James Cilano) and general guidance of the project is sharp and masterful. The story is conservative, but fulfilling, in its construction. Such transpires as DiVincenzo and Cilano tell the tale through several connected sequences. These are often exited and quickly returned to at seemingly random intervals. Such fleshes out the saga as satisfactorily as any full-length fiction. It also provides a non-linear, artistic streak to the proceedings. Such intensifies the well-rounded sum of the attempt. The same can be spoken of Cilano’s musical influence. Such is an endlessly enjoyable mixture of antiquated terror and melodrama. Furthermore, Adam Parchesky’s sound is tremendous. Jordan Pacheco’s puppeteering of the title entity, and other effects, are skillfully orchestrated. Like all the other technical elements we encounter in DiVincenzo’s latest, with gaffer John Mosetich and his leadership of the proficient camera and electric work chiefly among them, these articles jump out at us and demand our attention.

But, what is most charming of all is how easy it is to see droves of youth lining up to see “Trouser Snake”, and its promised sequel, as part of a weekend double feature at the drive-in. When reflecting upon the epoch the account is set in, the illusion cast by this ardent homage is smirk-inducing and complete. This is nostalgia of the best variety. It stays true to the trappings, the general arc and stereotypes of related outings. Still, it wins us over. This is, primarily, with the obvious affinity for the early Roger Corman/ Ed Wood Jr. brand of cinema DiVincenzo has attached to his narrative. With the support of an intriguingly designed beast, a wonderful and apt cast, a fluent pace and an entertainment level that never wavers: DiVincenzo has crafted a genuine knockout.